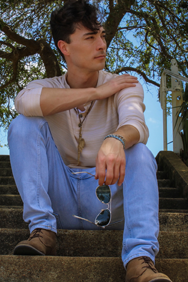 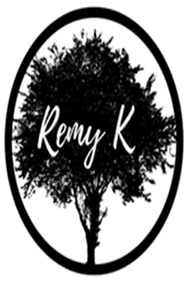 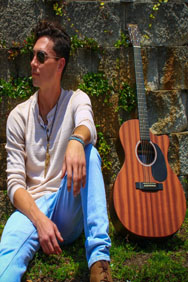 I was sent a series of questions that I will be reading off and I will be answering.

The first question is, who is Remy? And what makes you the person that you are today?


I'm a very outgoing person.
I think that pretty much like sums that part up, like as far as what made me who I am today, I think that's a combination of like, a lot of different things. And that's just like, you know, living life, right? Like, making mistakes,
learning from them. Just the other experiences that you go through. Like, I was a military brat. So I was raised in a pretty strict family. I had a Korean mother, a Korean mother, so like, anybody that's Korean, you understand what
that's like, because they're all bad shit. Um, I was also in the military, myself. And I spent some time overseas after that part of that was living in Korea as a business owner. The other part was in Japan in prison for five years.
So I've only been back out a little bit over a year and a half now. And, you know, just going through all that it kind of like, builds your character in a way because like, I feel like some of those things can either break you or
they can, you know, make you and luckily, I was not one of those people that were broken. Okay. I hope that answered that question thoroughly enough.

So the next question is you sing the retro music? If so, where can we hear it?

So, I so, I do indeed write my own music. Like I said, I'm a singer songwriter. When I first started performing, I actually only sang original songs, like I was totally reluctant to learn covers, eventually I got over that.

But uh, as far as my music, I think the easiest way to find it is like, if you go to my Instagram, Remi k music, REM y k music. And there's a link to my YouTube channel. And from there, you can hear most of the songs that I got,
I also had, like I said, I also have them on Spotify, and iTunes and everything like that, if you really want to look them up there, it's Remi K, you know, with a space in between, and then all in, type that in and my EP will come up.
It's like a short four song EP, and then I have another single on there. But if you find those, if you find the up, you can find that one as well. I won't say that they're professionally mastered or anything like that, because they're
not they're pretty raw recordings. I am working on getting that changed.

So my experience vary, you know, and experience always varies depending on what you're going through. Because you know, one thing is not going to be like the other. So I mean, the first competition I was ever part of was on Hoops
got talent, which was what hoops current show. Search for star was called before he got verified. He asked me to come on as a judge and I performed as a judge for one season. Unfortunately, I wasn't able to continue because
I had things going on because I'm also an intrapreneur entrepreneur. So I was opening a new shop and everything. So I was extremely busy. Life was kind of hectic for that short period of time. The other competition that I
was a part of and that that experience was actually super, super positive. Like I mean, there was also like stress involved that I wouldn't that I didn't anticipate, but like it wasn't so much that it was like unbearable.
Like it was, you know, it's just part of life. or streaming, I guess you could say the next competition that I was a part of was unstoppable. Hosted by idol. Yeah, the idol. And I made it to the semi finals.

I wouldn't say that it was a negative experience. I would just say there's a lot of things that I didn't really care for. And I probably wouldn't go back. I'm not saying that it's a bad venue for people that you know,
want to explore it.

I feel like unfortunately, the app at times can be bias And things are looked at, like, you know, if, for me if it's a talent competition, I think it should be based on talent not on showmanship. But then again, you know,
some people they want to show so like, you know, differing opinions, different approaches. So I mean, there are other talent shows on the app that I much prefer being a part of, such as music, but the music box showcase,
which is simply an open mic night, I'm also currently about to wrap up before and after on Aaron Kirby's show, which is on Aaron Kirby's channel. It's Aaron Kirby's new show, this is a second series, I guess, you could say, and
that's a very short competition. It's kind of a competition. It's just a showcase. And kind of helping singers, you know, reach outside of their comfort zone to kind of learn something new, which is super cool, because
I've been very reluctant to try and push myself and the week that I've taken to work on this stuff, I've pushed myself and learn new things like I've been working on my falsetto, which, I mean, if you can listen to my
voice imagine me trying to sing with the falsetto it's can train wreck half the time.


what do you like to do for fun outside the app?

Honestly, I do a slew of different things like outdoor activities. I love to wakeboard. Just go to the beach, go fishing. I longboard surf. Occasionally, whenever I get the chance, where I live, there's not great surf.
So is what it is I go drive, you know, just drive around, check out things, sit in coffee shops, hang out with people go out to open mic nights, go play venues, you know, just just do things to get out and be around people.
You know, enjoy every moment as much as I can.


The next question that's on here is What instruments do you play? And was it hard to learn them?

Okay. So the only instruments that I play like, well, are the guitar. And that's mostly acoustic my electric skills,
I don't tread on what I what I like to call it dumps drummer. And it suits me well enough, you know, just like throwing some kind of like fluctuations with the chords and everything like, and you can sound fancy enough.
I also play the bass guitar, which is the bass guitar. I mean, it can get complex, I don't get complex with that. I occasionally mess around with the keys. But I'm not good at those at all. Is it hard to learn an instrument, um,
it really depends, like, I'm one of those people that kind of pick up things naturally. But I hit a plateau and it's hard to get past. And that's probably why I don't move up and down, you know, on skills and everything like that
is because like, it's really hard for me to get past that plateau. I think that depending on the person, and their attitude, and their dexterity depends on how well they're gonna learn an instrument. I think that everybody has
the ability to learn an instrument.


If someone were to try and learn to get the guitar or another instrument and struggling, what kinds of tips would you give them to help ease their struggles?
Find what works best for you, because I've taught people guitar before and approaching it the same way every single time is not going to work. Because some people learn in different ways than other people.
Some people need a step by step explanation. Some people can learn just by looking, you know, just by being shown. Some people need a straight up, walk through, like you got to put their finger on the fret,
you know, in the right places and say, This is what you got to do, you got to learn this. So what I'm gonna say the only advice I have is to find what works for you, and not let somebody else dictate your learning
process.

Because it can be detrimental to your learning process and vocalize that. Don't let someone try and push you in a way that you know is not gonna work for you.

what are your goals in life?

Honestly, like my goals in life are simply to be happy, like eventually to be able to retire you know, to have kids you know, get married again, this time to the right person and have a couple of kids and you know,
just be happy like, honestly, I mean, if I wrote like a top hundred or like a billboard 100 song like, would that be great? That would be amazing.

So I guess that could be kind of like a backburner goal, like in the back of my mind.

What are your goals on the app?

I honestly don't set goals. myself on that, for the fact that I don't want to be the mature. Because if I set goals for myself on that I feel like I'm going to just just be led to disappointment.
You know what I mean? Like if I had to have a specific goal in that, I would say it's to meet new people and hang out and just enjoy myself, and hope that they enjoy hanging out with me when I'm streaming.
Because I do play music on the half and everything like that. on the platform between me, Scout, and POF.


Is there anything else that you would want to mention if I missed it?

Honestly, like, I think I covered a lot like I'm not super big on talking about myself unless I have a little bit too much drink,
which I'm trying not to do too often because it tends to get me in trouble. But yeah, my life enjoying hanging out, keeping it real. and easiest way to find my eyes, you can go to my Instagram, Remy k music,
there's a link to my YouTube channel, you can find everything. Even the stuff that I posted on iTunes and Spotify are on there. But if you want to listen to it straight through Spotify, or iTunes, or amazon music
or any of that stuff, it's all on there. And like I said, it's raw recordings. It's kind of like a foci foci country Southern rock kind of vibe. But it really depends on the song because every song is different.
as a songwriter, you don't stick to a specific genre. I feel like so that's why everything that I write isn't necessarily for me to say. But uh, Anyways, thanks, guys for listening. Jay, I super appreciate you asking
me to do this and I hope that everyone has a wonderful day. And maybe I'll see you guys around!